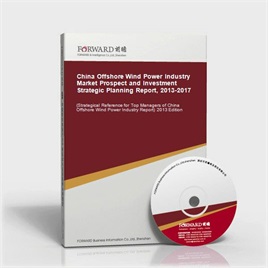 As of the end of 2010, there are 43 offshore farms across the world, with 1,339 wind turbines and with a total capacity of 3.666 million KW. Nowadays, offshore wind power is becoming popular in the global wind power development field.

In 2010, there were 1.444 million KW installed capacity in global offshore wind power field, up by 110% over the previous year, accounting for 3.7% of the global wind power sets, which mainly distribute in UK, Demark, Belgium, and Germany in Europe. Among them, there were newly increased 925,000 KW installed capacity in UK in the year of 2010, becoming a global leader in offshore wind power industry. It’s predicted that UK would maintain its leading position in the next few years; Germany adopt 5 MW and 6 MW large wind power turbines to construct offshore farms in recent 2 years, becoming a rising star in offshore wind power industry. Beside the prosperity in Europe, there are two wind farms in China: Shanghai East Sea Bridge Offshore Wind Farm and Rudong Intertidal Wind Farm in Jiangsu province, both of which provide experience of equipment manufacturing, project construction, as well as operating and maintenance to construct large-scale offshore wind farms.

It’s widely believed that 2010 is the beginning year to develop offshore wind power industry for China. The franchise bidding of offshore wind power projects was launched in May, and the first round bid-winning enterprises were China Datang Corporation, State Grid Corporation of China, China Guodian Corporation, as well as China Power Investment Corporation and its subordinate corporations. In the second half of 2011, China will start the preparation work of the second round of franchise bidding of offshore wind power projects. It’s predicted that biding work will be finished in the first half of 2012, with a total construction scale between 1.5 million KW to 2 million KW.